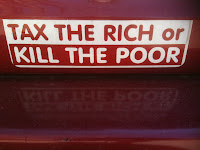 While the rich can always get richer, it appears the poor have run out of room to fall any further.

How’s that for putting an end to torture!

According to the most recent census, the income gap between the richest and poorest Americans grew last year to the widest disparity ever recorded.

A new record! And they couldn’t have done it without us!

So congratulations to all the Wall Street Billionaires, Oil-soaked Mega-Billionaires and Amoral G.O.P. Minionaires who could not have set a new record for greed, avarice and galloping narcissism without the aid and gullibility of a majority of the voting public. Of course, kudos also to the Supreme Court, which bent over backwards to discard established law and allow unfettered purchase of all America’s elections by those who could afford them.

So congratulations to all of us for this record achievement. We truly earned it and, if we don’t wake up to what’s happening while we still have a pair of pants left to wear, we will truly deserve it going forward.

And remember, if we’re one day forced to forego some of those things we’ve come to expect from a civilized society—a comfortable retirement, a scrupulous financial system, help when we need it, an equitable share of the nation’s wealth, an affordable education, decent medical care or salaries that keep up with inflation—just keep in mind the rich are making their fair share of compromises, too.

I just can’t think of any at the moment.

I’m thinking of printing up a bunch of the bumper stickers like the one shown above. If you would have any interest in sporting your very own “TAX THE RICH OR KILL THE POOR” bumper sticker, contact me at PaulStevenStone@gmail.com, and I’ll see about making them up.