In an ordinary election year the question asked in the headline would be a no-brainer. 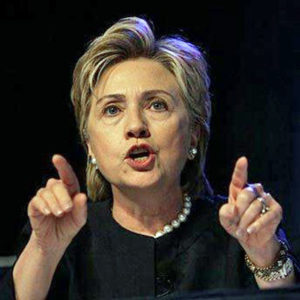 But to state the obvious, “This ain’t no ordinary election year!”

Nor is it an election contest whose like has ever been seen before. In addition to boasting the two most disliked candidates in the history of our country, we are faced with a moral dilemma never before seen or equaled.

And please understand, though I hold Hillary Clinton in the greatest contempt, I do NOT wish you to vote for Donald Trump. God forbid! There are many reasons why Hillary represents a better choice than Trump for the presidency.

But there’s one irrefutable reason why, by my lights, you should vote for anyone other than Hillary Clinton.

In stealing the Democratic nomination by blatant and pervasive election fraud, Hillary denied millions of Americans the right to have their vote count. I say ‘millions’ because, in addition to the voters whose votes she suppressed or stole, she also denied that right to the 13 million voters whose votes were recorded for Bernie Sanders; votes that were made meaningless by an election process rigged for Hillary from the start.

By stealing the nomination, I believe Hillary proved herself unworthy to be our leader or, more importantly, showed her contempt for the constitution she hopes next January to take an oath to defend. Simply put, she is not worthy of the position to which she aspires.

If you are not aware of Hillary’s stealing the nomination in primary after primary, you need to quickly disconnect from the corporate owned and controlled mainstream media, whose universal silence about the matter proves its complicity, and go online. The election fraud went far beyond what was mentioned in the DNC emails. It involved the purging of Sanders supporters from voter lists; the switching of party registrations to prevent their voting; the hacking of electronic voting machines; the elimination of voting stations within proximity of college campuses; and so much more. And it continues today, with an industry-wide blackout on any mention of election fraud, or fraud accusations against Hillary, of which there are many, or election fraud lawsuits (three currently moving through the courts) charging Hillary’s campaign and the DNC with massive election fraud.

Nor has there been any mainstream media discussion about the deviation of exit poll results in many of the Democratic primaries. In third world countries whose elections are U.N. monitored, a 2% deviation in the exit polls is a clear indication of election fraud. The exit poll deviation in states whose voting machines are considered most hackable ran from 6% to 23%.

I make no excuses for Donald Trump’s boorishness or his lack of qualifications for the presidency, arguably the most important job in the free world, but I will argue he won his nomination fair and square and now he’s running against a woman who lied, stole and cheated her way to the Democratic nomination.

Shouldn’t that count for something?

“Yes!” you might answer, “But then again Trump is a madman and we can’t let a madman become president.”

Is Trump really a madman, or is that just an idea created by a corporate media dead set on raising Hillary to the presidency? Ever since Trump won the nomination, the mainstream media (I call them the Mainstream Media-ocrity!) has been trying to kill Trump’s chances at the presidency by labeling him crazy, unpredictable, cruel, stupid, bombastic, heartless and a bully. That from a news industry that went out of its way to ignore and keep silent about the biggest news event so far in 2016—the theft of the Democratic nomination!

How can the country’s entire media—even NPR and The New York Times!— not notice the theft of the Democratic nomination?

By ignoring such a major journalistic opportunity, the media seems to be suggesting Hillary’s election crimes are insignificant—trivial even!—compared to the crime of electing a buffoon as America’s next president.

Historians will little credit the skill or sophistication of Hillary’s criminal slog to the nomination. The theft of the 2016 Democratic nomination was the most clumsily executed crime of this young century. Votes were flipped, suppressed, shredded and outright stolen by a gang of crooks dedicated to ensuring Hillary’s coronation as the Democratic candidate for the presidency.

Worse than that—yes, even worse than the media lying down like lapdogs in obeisance to Hillary’s plans and sense of entitlement—is that organs of government were suborned to ensure Hillary’s nomination. How high up in the government the conspiracy reached is hard to assess, but anyone who witnessed Hillary and her aides receive their golden “Get Out of Jail Free” passes from the FBI, Department of Justice and the White House, was probably shocked by the obvious corruption of these critical institutions, and greatly frightened for the future of democracy in our country.

So I’ll ask the question again. “Should Hillary’s theft of the nomination disqualify her from getting your vote?”

Me? I’m voting for Jill Stein.

Also, my post for young aspiring journalists looking to avoid the obvious pitfalls of working in corporate media:  How To Spot A Stolen Presidential Election.

Also about the election:

•Why Millennials Will Never Vote For Hillary.

• What did Obama Know and When Did He Know It?