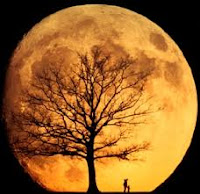 Somewhere long ago, he hid his heart on the moon.

And afterwards through the years he watched it come and go in phases. Sometimes full, more often on the rise or fall. But always more distant than he could understand.

Those who weren’t close to him could never see the true image of his emotions. To them he offered the idea instead of the reality. They were given snapshots to study, to hand around and discuss. To them the moon was always full even if clouds sometimes passed overhead to filter the light.

But to those he loved, for whom pretense was too heavy a cloak to wear, he let the waning and the waxing of his feelings serve as a true source of illumination. They could never understand—as he couldn’t himself—this painful rising and falling of light and love, why sometimes the moon was full and other times it was only a sliver in the night sky.

If he had the wisdom to see through space he’d know that he’d hidden his heart on the moon as a legacy to his father. And that within the crater where his strongbox was hidden lay another heart that had once so significantly lightened and darkened his world. He’d know that he’d been taught the mechanics of love as if an automatic switch regularly flipped love on and off to keep it from overheating. And that the heart learns its lessons from pain, passing them intact from one generation to the next. So that one day if the cycle isn’t broken the moon will grow dark and heavy, overpopulated with hidden hearts.

Somewhere long ago, he hid his heart on the moon. Near where his father and his father’s father had once hidden theirs.

And one day if he doesn’t make the journey to retrieve his hidden self, his children will go off to hide their own treasures where darkness falls in a consistent ritual.

On a cold barren planet.

A million miles away.