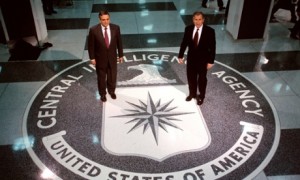 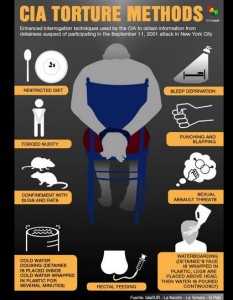 But nothing is worse than the waiting.

Because in the waiting he succumbs to that cruelest of torturers, his imagination.

Sitting on the cold floor, leaning against the concrete wall like something used up and abandoned, he sees images in his mind and shivers uncontrollably. Matted blood spots have tracked a ghoulish pattern up and down his thin pajama-like shirt and pants.

He looks down and notices his feet are silvery blue. Days ago his torturers took away his socks; perhaps it’s been weeks now, he can’t be sure. Time is no longer a concept used to measure days or weeks. There are no nights or days in this cell which is so devoid of personality it could easily be a hellhole anywhere in the world. There are no windows; only the constant glow from a single bulb encased in steel mesh.

He can’t tell you how long he’s been here. Or how many times they’ve dragged him from his cell. He only knows it’s been too long and that, frighteningly, at any moment his torturers could return.

By now he has learned his captors won’t respond to pleas of mercy or cries of pain. And no appeal, confession or sliver of extracted information will put an end to their brutish cruelties. They are professionals, his tormentors, and will do anything that serves their purpose even if they have no purpose but to inflict pain.

Once, long ago, he had a life outside this realm of constant misery. His days were filled with the repetition and minutia of a mundane existence, all of it taken away without explanation or apology, like the clothes they ripped from his body that very first day.

Does anyone know where he is or whether he’s still alive? Does anyone care? And what does his wife think? Does she believe he woke up one morning and decided to walk out on her? Do his children think he’s dead or that he suddenly stopped loving them? And how will they survive?

These questions, rising up in the rare hazy moments he transcends his pain, are also tools of torture. More subtle in their infliction, but no less capable of breaking him down. It’s as if he’s been schooled to torture himself while he sits and waits for his torturers to return. An ironic sort of apprenticeship, to say the least.

“I’m sorry,” he cries out to his wife as if he, and not his captors, had made the decisions that brought him here. “Please forgive me,” he starts to plead but stops at the sound of footsteps outside his cell door…

With the ominous echoes of those footsteps ringing in our ears, we take leave of our anonymous prisoner, keeping in mind he could be anyone. A terrorist, a political prisoner, the blameless victim of a vicious regime. He could also be someone from our side. A soldier fighting for his country. A spy trapped in his own web of intrigue. A businessman caught in the wrong place at the wrong time.

He could be anyone. He could even be you.

Torture is blind in its search for victims. It devours the good as well as the bad, the innocent as well as the guilty. Knowing that, is it possible to imagine a single crime or slice of intelligence that would justify the physical, mental and emotional torment visited upon our prisoner?

This is not about one-in-a-million scenarios where terrorists have hidden a ticking nuclear bomb. This is about the humane treatment of everyone else on the planet.

Who in the universe has the right to play God with an individual’s body, mind and spirit in such life-crushing fashion? Not only brutalizing a totally vulnerable person, but to peel away the humanity, rights and protections that differentiate human beings from animals.

In America we have been brought up to believe the only way to protect the rights of the masses is by holding sacrosanct the rights of the individual. Denying habeas corpus to a single person is the first breach in the levee behind which we all stand waiting. Denying a prisoner due process, access to a lawyer, third party visits, or even acknowledgement to the outside world that he is alive, are actions that betray the United States Constitution, the Geneva Conventions and, most important, America’s sense of fair play and justice.

Yes, we have sadly left our prisoner in his cell waiting for the return of his torturers. If you listen closely you can almost hear their steps as they approach his cell, then the protests of the steel-plated door as it screeches open.

America by itself cannot put an end to torture.

But only America can ensure this scene doesn’t end with Americans walking into that cell.

This story appeared in my book of essays, “How To Train A Rock.” When I first wrote the story—back in 2004, I believe—the American government was asserting at the highest levels that “America does not do torture.” That lie fed repeatedly to an apathetic and largely nondiscriminating American public kept America’s torture machine in business and created a climate where the story above ending with Americans entering the cell to commit acts of torture had some shock value, and was not as obvious as it seems now, given the recent Senate revelations. Still, the sentiments expressed and the general sense of repugnance, shame and disappointment evinced by the author are as true today as they were back then.

For those who’ve been watching with wide-eyed shock as the Fox News/Sarah Palin/Glen Beck juggernaut convinces normally sane voting Americans that the Democrats are responsible for all their struggles, pains, fears and unhappiness, I offer a brief stroll down memory lane. See how many Bush-era scandals, blunders and constitutional crimes you can recall. Then marvel at how many additional screw-ups were left out. I’m not saying the Democrats or Obama deserve your vote, but I am arguing (through the lens of history) that the Republicans deserve nothing more than disgrace, censure and ridicule. Please forgive me if my droll foolery offends you.