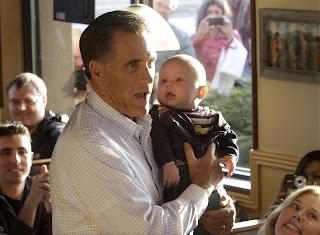 Call it bravado, an innovative political maneuver, or an outright felony, but whatever you call it, Mitt Romney has taken a decisive step towards grabbing the Republican nomination for president.

“It all happened so suddenly,” cried Marie Fayreweather in describing the former Massachusetts Governor’s dramatic hostage-taking of her 6-month-old son, Bailey. “One moment I told Mr. Romney that as much as I admired his good looks and vast riches, I still intended to vote for Rick Santorum, the next moment he cried, ‘Not on my watch you won’t!’ and grabbed my little Bailey.

“Wait a second,” I pleaded, “Bailey is too young to vote, and besides I’m afraid he wouldn’t like traveling on top of your family station wagon.”

“Never fear,” Mitt rattled back, “Seamus never shares his dog carrier with anyone. And besides, if you won’t vote for me I’ll hold onto Bailey until he’s old enough to vote for me himself.”

Romney’s campaign later issued a statement denying that the candidate had wrested the child from his unwilling mother, but that Bailey had clearly indicated a preference for the moderate-but-severely-conservative Republican candidate. And that Mr. Romney intended to hold onto the ‘little tykester’ as he’s already called until Romney wins the Illinois Republican primary or the hunting season begins, whichever comes first.

Romney, as he’s often stated, is a gun-loving member of the NRA who has killed so many rabbits that the town of Belmont, where the governor once lived, had to restock the town forest on a yearly basis.

The Romney campaign’s newest political slogan, “Vote Romney if you ever want to see Bailey in daycare again!” is already picking up momentum and voter support. Without a doubt, a majority of undecided Republican voters find it more convincing than Romney’s earlier tagline, “I made $250 million off the sweat of others, imagine what I can do for our country.”

It’s too early to tell what long-range effects the hostage-taking might have on the primary or, eventually, the general election, but political pundits have already begun talking up Bailey as a possible Vice Presidential candidate.

So far there’s been no comment from Bailey, who hasn’t yet learned to speak.

Salt Lake City, UT—Mitt Romney today made the boldest moves yet of his political life, changing both his religion and blood-type after a dismal showing in recent Republican primary contests. You’ll recall, as reported earlier on these pages, that Mr. Romney had switched his party allegiance from Republican to Democrat after a similarly dismal showing in the South Carolina primary.

When asked if this wasn’t more proof of his pandering to the opinions and prejudices of an extreme, narrow-minded electorate, Romney said, “Heck, Anne and I have been thinking of becoming Seventh Day Adventists for years, so our conversion had nothing to do with unfavorable poll numbers for the Mormon religion. And the plain honest truth about this business of changing blood types is that I’m fed up with people telling me how cold-blooded and distant they think I am. Researchers on my personal medical team have advised that I can heat things up with a different blood type, something you might find more prevalent amongst hispanic populations.

“Is it expensive to change blood types?” Romney rhetorically asked. “You bet it is! But, gosh darn, it’s so critically important that we defeat Obama, I would make any sacrifice.

When asked if we could anticipate any future changes, Romney smiled and replied, “Hey guys, what you see today isn’t always what you’ll get tomorrow. I’m a servant of the people and I have to follow their lead wherever it may bring me. I’ll take no change options off the table. Except of course for my name. I’m not changing from Romney, no matter what anyone says.

“Besides, it’s far too difficult changing names on a Swiss bank account!”

Columbia, S.C.—After weeks of being pummeled and ridiculed in Republican primary contests for being a closet moderate, Mitt Romney stepped out of the closet today and declared himself a “full-blooded and full-throated Democrat”, pulling his hat out of the ring in the remainder of the Republican Presidential Primaries and signing up instead to challenge President Barack Obama for the nomination of his newly-adopted political party.

“I’ve always been more progressive and more of a Democrat than President Obama,” Romney declared. “Remember, first came RomneyCare, second came ObamaCare. As Democrats, we take care of the poor and the middle class. Nobody will fall between the cracks on my watch. Hell, the first thing I’ll propose once I win the nomination is an increase in taxes for the wealthy. Who knows better than me, how much more the 1% can afford to pay in taxes. President Obama doesn’t have enough money to get invited to our 1% secret society meetings. If he did, he’d most likely get mistaken for one of the help.”

When asked how he could justify walking away from the conservative posture he’s been avowing and defending for months on end, he smiled and answered, “Fooled you, didn’t I? All that time I was pretending to hate poor people, and attempting to demolish the middle class, I was really chafing at the bit to declare my love for my fellow man. Now I can’t wait to get down to Florida and debate President Obama. After allowing Tea Party madmen and millionaire shills to push him around like a 97 pound weakling, the President has a lot to answer for. How dare he take four years to turn around an economy that was gang-banged, sacked and left for dead by the Bush administration? How dare he allow the Republicans to front for billionaires and pretend to care about the working class in our country? How dare he rescue the American automobile industry and leave Lehman Brothers to twist in the wind? Hell, if you thought I was heartless strapping old Seamus to the top of our family wagon, how does that compare to Obama walking away from Health Care Reform without a public option in place? Everyone knows the insurance industry will make hash of any real financial reforms without the presence of a public option.

Speaking about the danger of being called a flip-flopper for jumping parties, Romney declared, “What if I tell the voters this is it, my final stand? Today—and forever—I believe women have a right to make decisions about their bodies. I believe life begins somewhere between 3-6 months after conception. I believe America lost its way when we attacked Iraq without clear reason, or when we tortured our prisoners and called it ‘enhanced interrogation.’ And now I truly believe that corporations are, well, corporations. Definitely not people. That sounded so lame when I said it not even conservative commentators could repeat it without smiling.”

“So in summation,” Romney concluded, “I hope Democratic primary voters will forgive my previous lies and obfuscation. I may have dated the conservatives and Tea Partiers, but I can honestly say I never slept with any of them.”