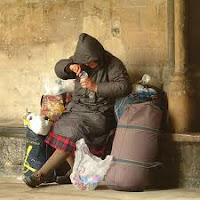 Yesterday I looked around and realized there was only beauty and happiness in the world. Everybody had a home, two Mercedes and a signed Christmas card from George W. Bush.

Yesterday I looked around and realized I didn’t have to wait to go to heaven.

Yesterday I looked around and realized there was no hunger in the world, and that poverty only existed in old newsreels and fiction. Everybody had quiche for breakfast and an American Express card for emergencies.

Yesterday I looked around and realized I was no longer just a man. I was a member of a club, and membership had its privileges.

Yesterday I looked around and realized there was nobody in the world that needed my help. Everybody had more than enough love and every child knew just what they wanted for Christmas.

Yesterday I looked around and realized there was no reason to wait for the second coming. It couldn’t get any better than this.

Yesterday I looked around and realized there was nothing I had to do for anybody. Everybody had gotten exactly what they deserved from life and only deserved to get more.

Yesterday I looked around and realized I was the center of the universe.

Last time I saw the American Dream was Tuesday, down at the Unemployment Office. He was looking pretty worn out, as if being unemployed for over a year was finally getting to him.

“How’s it going?” I asked cautiously, not wanting to step on any sensitive toes.

“It’s finally getting to me,” he answered. “It’s been over a year since I worked. And now my youngest, who I just finished paying for her college, lost her job and can’t find anything. She says there are no jobs.”

“Sorry to hear that,” I offered, starting to move off. But the American Dream grabbed my sleeve, arresting my departure.

“My son moved in with me,” he continued, the story beginning to gush out like a cataract. “Guess how much he owes from his college loans…”

“Guess,” he pushed, almost desperately. “I hear this figure in my head when I lie down to sleep at night. Guess—oh, hell, I’ll tell you—$240,000! Almost a quarter million dollars in college loan debt! ‘Who are you borrowing from, the mafia?’ I asked him. But he just kept saying, ‘Sorry, Dad.’

“A quarter of a million dollars; that’s a lot of money.” I opined.

“And it was compounding daily!”

“What could I do? I paid the debt down to $200K. Now my ex-wife and I pay off the interest each month, keeping it at $200K. But once my unemployment runs out, she and my son will be on their own.”

He ran his hands through his disheveled hair, causing me to comment, “You don’t look so good, you know?” And it was true. Ordinarily, the American Dream is a very buttoned down, upbeat guy; but this morning it looked as though he’d been up all night wrestling with a feverish lover or an unsolvable problem.

“The well’s almost empty,” he said through a dry mouth. “Unemployment’s running out, my savings are gone, my stock holdings, including my 401(k), are next to worthless, and my son, as I mentioned earlier, has moved back in with me and taken over my family room.”

“Well I have some good news,” I said happily. “I got a job! This is the last time you’ll see me hanging around these gloomy environs,” I added, giving a meaningful look around at the roomful of unemployed misfits and shirkers. “I’m back to a real paycheck starting next week.”

Doing what?” he asked, clearly trying to hide his envy.

“I’m a lobbyist,” I answered, feeling somewhat out of my comfort zone. Normally I don’t speak about my livelihood with someone who has the weakness of character to be out of work. No matter that we were friends or acquaintances. Not able to resist bragging, I added, “I’m a great lobbyist really! I only lost my previous job because of jealousy and my boss hated me. I used to lobby for “financial interests” such as banks, brokerage houses and lenders of all stripes. Hey, I was the one who lobbied to make it impossible for student debtors to declare bankruptcy on their student loans.”

“But my son…” the American Dream said, realizing the import of what I had just said.

“Yes, I lobbied for the bill that will ensure your son is in debt for most of his natural life. You and he are lucky. Had I had my way entirely—or my client’s way, really—the interest rates on his loans would rise automatically every fifth year. Republicans liked it, but they were worried; they’d just guaranteed the drug companies that the US government wouldn’t use its bargaining power to lower the price of drugs for the elderly. Didn’t want to be seen as giving away the store.

“Then there was my work against Wall Street Reform,” I continued, uncertain that the American Dream wished to hear about my dismantling any real financial reforms proposed by congress or the president.

“If it wasn’t for me,” I crowed, “People like you who by no fault of your own find yourselves broke, in debt and about to lose your homes, could have previously sued the banks, investment houses and hedge fund managers who turned your family’s home into a worthless investment vehicle. Now, you have to sue Bernie Madoff because he’s the only one taking any responsibility for screwing up our financial system.

“Too bad Bernie didn’t hire my lobbying firm before the pyramid collapsed. We could have gotten him an exemption in the ‘too big to fail’ category. Or something.”

Obviously uncomfortable with me talking about my past triumphs, the American Dream asked me about my new job and its responsibilities. “Is there anything you’re doing that you can be proud of?” he asked pointedly.

“I don’t know what you mean,” I answered huffily. “I’m proud of everything I’ve done. Our system is set up so that everyone has freedom to participate. If the rich have more money to buy a larger slice, well that helps all of us; puts more money into the economy. At least into my economy!”

“You’re not answering the question,” he reminded me.

“My job is to help congress rewrite regulations,” I answered proudly. “All the new regulations and restrictions congress recently enacted are preventing jobs, business growth and other opportunities.” I explained. “As are all those environmental restrictions.”

“Wait a minute,” the American Dream said, seeming to suddenly awaken, as if from a dream. “Are you telling me that the Financial Sector, which caused our Economic Emergency because no one was watching them, now wants to use the Economic Emergency itself as an excuse to eliminate any rules or regulations they don’t like!”

“Exactly,” I said. “And I can be proud of playing a small role in that effort. I can also be proud of the small fortune I’ll get paid to do it.”

As the American Dream started to walk away, seemingly agitated, I called to him, “Where are you going?”

“For psychotherapy,” he answered sullenly. “All this crushing debt and relentless uncertainty is driving me crazy.”

“Word of advice,” I told him. “Sign up quickly. I’m working on a bill right now to drop that coverage from your health plan.”