Representative Thomas Finneran will go down in local history for a variety of egregious acts committed against the best interests of the Commonwealth and its citizens. First, of course, he will be remembered as the politician who terminally wounded Clean Elections in our state by refusing, as Speaker of the Massachusetts House, to honor the referendum vote that legally established publicly financed elections and limits on campaign spending for public office. 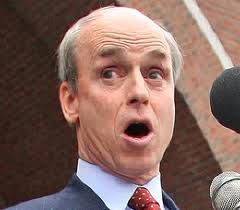 Then, of course, the Stalinist Speaker from Dorchester will most be remembered for his conviction on obstruction of justice charges. The obstruction was committed in a trial where he professed ignorance of redistricting decisions that he himself dictated to his dutiful minions. The fact that those decisions discriminated against black and minority voters to the benefit of himself and other incumbent white legislators was a mere coincidence, according to an unrepentant and defiant Finneran.

And most recently, in Federal Court we are witnessing the real legacy of Thomas M. Finneran at the racketeering trial of former Probation Department officials. Though John O’Brien, former Probation Commissioner, and two of his deputies are the ones on trial, it’s really Finneran’s legislative shadow that falls across the proceedings. Because it was Finneran who empowered O’Brien, thus enabling the allegedly rigged hiring system that  favored well-connected applicants over more qualified candidates. A system that fed on a vicious cycle of yearly budget increases voted by a patronage-hungry legislature. A system that poured millions of tax dollars down a sink hole of cronyism. Millions of dollars funneled to friends and relations of politicians rather than the state’s under-funded schools, broken down bridges or its struggling transportation system.

Of course, the biggest cost was paid by those lawbreakers in the probation system who for years were denied the value of honest guidance and supervision by highly qualified probation officers. Who can calculate the price they paid?

But back to our story…

Finneran was Speaker of the House in 1997, when O’Brien was appointed to run the Probation Department. Increasingly frustrated by a system that required the approval by local judges of all probation officers assigned to their courts, Finneran, in late 2001, pushed through a bill centralizing hiring and promotion decisions in O’Brien’s office.

It was Finneran who knowingly created this honey pot for his legislative colleagues. Finneran who enabled John O’Brien and his Probation Department to become the alleged disasters they ultimately became. Finneran who should be sent an invoice for every dollar paid by the state to every under-qualified probation department employee. And if you read the list of the department’s politically-connected employees, you’ll find a select inventory of relatives and friends of the state’s high and mighty, from two sons of former Senate President William Bulger, to children, nephews, friends and campaign workers of more politicians than ordinarily show up for work on a normal day at the State House.

As Finneran explained at the time of his 2001 legislative push to give O’Brien unchallenged hiring authority, “If you scan a list of probation officers, there might be sons and daughters of politicians and judges there. That’s not going to go away. And, honestly, I don’t think it should. They shouldn’t be excluded because of the achievements of their parents.’’

To which I’d like to add, “Nor should a politician be excluded from paying for the cost of his political crime, even if he’s merely its unindicted legislative enabler.

So, please, can somebody figure out how many millions of dollars the Commonwealth has spent in the last dozen years to fund a Probation Department strong on political connections but almost bereft of professional focus or substance?

And then, please, I beg you, send an invoice for that amount to Thomas M. Finneran.

In lieu of our sincere “Thanks!”