I’ve been very vocal about my outrage concerning Hillary and the DNC, much to the concern and consternation of many, even those who love me. Allow me to further illuminate what this is all about, since many seem so confused and worried about my mental state. 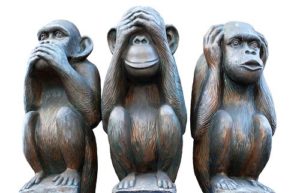 The American Media at work during the Democratic primaries.

Anyone who closely watched the 2016 electoral process found themselves witnessing a shamefully blatant collusion between the government, the DNC and the media (which ignored and buried any positive news about the Sanders’ campaign). What most shocked me was the media’s role in elevating Hillary and burying Bernie. The fact that 700 delegates walked out of the Democratic convention without getting any notice in the national press is a great example of how the media controlled the message we were all fed. And how they took their direction from the Clinton campaign, ignoring the many signs of voter suppression and election fraud in the primaries, pretending the Democrats were unified at the convention, which was a real joke. There’s a video that shows Jake Tapper of CNN hastily cutting to Boyz 2 Men on the convention stage to prevent CNN reporters from covering the delegate walkout.

The Federal government at work protecting our democratic process.

700 delegates walk out of the Democratic Convention and the Mainstream Mediocrity doesn’t find that newsworthy! For me—and this is key to my stand on Hillary—the cabal behind Hillary was essentially attempting a non-violent coup d’etat. If you drop polite terms, conspiring to steal an election, and nullifying millions of votes, is tantamount to Treason. I appreciate the concern many have shown about my frequently expressed outrage. That has led to a lot of misunderstanding, people assuming I was supporting Trump because I was against Hillary, or that I had gone over the edge.

Let me be clear, my first priority was to protect and defend the Constitution, something Obama failed to do in allowing the Democratic nomination to be stolen. What did Obama say? Democracy is hard work? Obviously, defending democracy was equally difficult for him.

At times I feel like the little Dutch boy who discovered a leak in the dike. Even if nobody believes me, should I shut up and walk away? Or should I stick my finger in the hole and start shouting for help?

Even if people don’t wish to hear the truth about their favorite candidate?

Thankfully, there’s no longer any need to fight Hillary and her cabal. Through some ironic twist of fate, she and her fellow conspirators lost the election, leaving us to deal with someone in the White House seemingly not worthy of leading the country. Or the world! For myself, I will continue to disseminate the Truth about the 2016 election, as I see it, and to fight anything Trump does to threaten the welfare of the planet and the people who live upon it.

If you’re angry about Trump becoming our president, don’t blame me; blame Hillary and the Democratic Party whose grab for power set all manner of bad outcomes into play.

If you’re worried about me because I refuse to quietly accept the theft of our democracy, or the leadership of a failed and corrupt Democratic Party, worry first about yourself or anyone else who quietly accepts it.

Also about the election: Why Millennials Will Never Vote For Hillary., What Did Obama Know And When Did He Know It?, Have You Had This Talk With Your Children yet?, The Russians Wrote This, Too!  The Drums of War,