The entire planet should take a deep breath and release a giant, communal “WTF!” Now, everyone standing should get down on their knees and pray to whatever God We Trust that neither of the two major party nominees make it to the Oval Office. If they do, brother, we are definitely fucked.

After six months of primaries and eight months of non-stop nonsense, 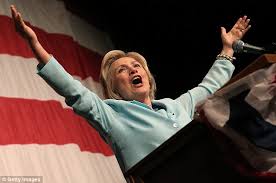 we are left with two candidates for the highest office in the land…one who wrote “The Art of the Deal” and parades around the public stage like a narcissistic clown in a Fellini film, the other who perfected “The Art of the Steal” in running for her party’s nomination, the greatest theft in the history of American politics, if not also the clumsiest.

Someone else will have to explain Donald Trump to me. He’s so Gonzo it’s impossible to believe he’s gotten as far as he has running for the presidency—even as a Republican candidate! I watch him purposely walk into wall after wall, as if he’s blindly searching for a door that repeatedly shifts locations; and I don’t know what to make of him. Attacking war heroes; refusing to endorse his own party’s leaders; making inane statements; verbally assaulting women, blacks, Mexicans, reporters with disabilities, the parents of fallen soldiers—the man is totally unpredictable except for the fact he can be expected to say something crass, hateful, childish, sexist or stupid every time someone sticks a microphone in his face.

Is Trump deliberately trying to lose the election? He certainly acts as if he is. Has he made a deal with Hillary and Bill, who seriously know something themselves about making deals? A deal to screw up his campaign so badly the only people who vote for him would have to have suicidal tendencies?

As much as Donald J. mystifies me, I do understand Hillary. I call her The Gonif, or thief, in honor of her successful theft of the Democratic Nomination. I say ‘successful,’ but anyone with eyes and even the shortest attention span must have noticed the massive, blatant and heavy-handed irregularities—not to mention the accompanying stench—that rose like a black cloud across the country from the democratic primary process. Votes were stolen, voters were kept from voting booths, voting lists were purged, party registrations were mysteriously switched, ballots were thrown out or shredded, and all the exit polls showed wild discrepancies from the final results, all these abnormalities coincidentally favoring one candidate to the detriment of the other.

If all of this is news to you, you need to stop getting your news from CNN, NBC, The New York Times, The Boston Globe or any other member of the Mainstream Media-ocrity.

Hillary and Bill are all about two things: Power and Money, the former always leading to the latter. No sooner did Hillary step into her role as Secretary of State than the Clinton money-making apparatus shifted into high gear. No longer selling sleepovers in the Lincoln Room for $50K, they were in the big time now. Russia wanted to buy 20% of the world’s Uranium holdings? All they had to do for Hillary’s approval was pay $500,000 to have Bill fly over and speak at a Russian bank. (Don’t expect Russia to run out of radioactive fuel in the near future.) Saudi Arabia and Qatar wanted approvals to buy sophisticated American weaponry? All it took were multi-million dollar donations to the Clinton Piggy Bank, otherwise known as the Clinton Foundation. There’s more, lots more; so much more I run the risk of boring myself.

So here we stand on the cusp of an American presidential election that makes me feel like I ingested some bad acid. On one side a candidate so unbelievable he’s ideally suited to represent a party that spent the last 20 years denying reality. Any party that denies evolution, climate warming and Obama’s birthright deserves nothing less than a jackass for its presidential nominee.

On the other side, a woman who deserves a prison sentence rather than a four-year term in the White House.

The Gonzo versus The Gonif. I don’t know about you, but I’m voting for Jill Stein. A little less drama and a lot more integrity would be a good thing.

But then there’s also Canada…?